Today I watched the same accident happen as last month with the same type of car: old Dacia in big smoke in the middle of the day on a main street and boulevard. The diver pulled the wheel and hit the limiting pillars in the middle of the road and stopped. He was carrying windows and had printed on all sides of the car a company's name and the phone numbers. Maybe the driver was hired or maybe he was the owner, anyhow he was driving a car older than 15 years and  which had little investment lately. I wonder if the revision was made for this car or the technical inspection. He got out of the car, slightly panicked, and threw his lighted cigarette on the cement turning it off by stepping on it. Then two policemen on bikes passed by, but none of them stopped. I am thinking that the rest of us, the drivers in the traffic, could have jumped with a fire extinguisher, but I didn't know very well what happened to the car just like the rest of the people next to me. Anyway the whole preoccupation with smart phone leaves few eyes present to witness the smoke. I moved on under the invitation of the green light. Further on, I met other 2 police cars with policemen and they were just standing there quietly. I am curious if this time they have not put something on the news.
Last time I was coming out on the parallel line of Aviatorilor boulevard and got stuck in traffic. It was funny that the main boulevard was empty of cars and looking back I noticed an old Dacia smoking heavily. Then I got out of the car to see what's going on in front of us. A driver in front of me on the only line had stepped down to give a helping hand with a fire extinguisher. Obviously the owner of Dacia didn't even have that in his car. I wonder if he had the technical inspection. And I have asked for some explanations to the driver in front of me about how he imagines that it's smart to stand by and block all of us there and be sure victims in case of an explosion. Then he moved and they gave up the staring. In the evening I watched the news to see if there was any word. Nothing.
They keep feeding information about Romanians loving second hand cars. I am sure many could get new cars through "RABLA" and a small loan from the bank, but the Romanian people loves leaving things unfinished. And that's what's killing us often. This "leave it for tomorrow", "don't fix it yet", this ignorance to the problem we pass by and stare and the lesson that has no effects. Each time we wait for the fateful "bad luck" to explain indolence, not caring and greed. 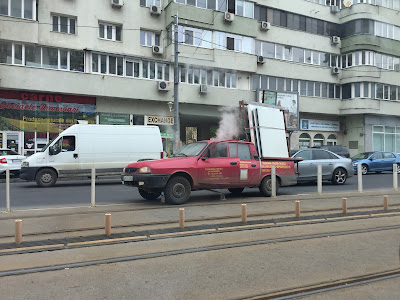 Posted by Raluca Mateescu-Dumitru at 5:28 PM